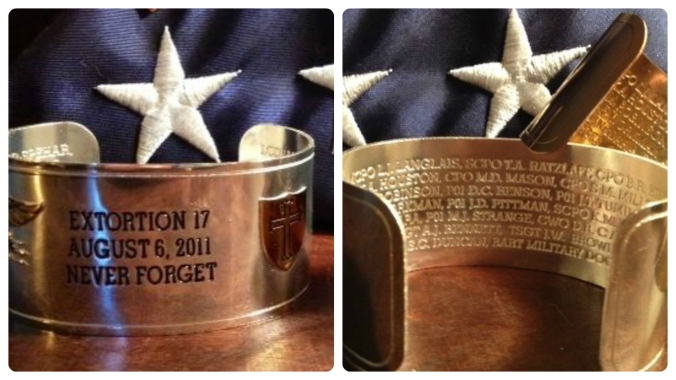 A limited number of these custom cuffs were made again exclusively for LZ-Grace (Landing Zone Grace) in loving memory of our 31 heroes killed in action on August 6, 2011.

To ORDER, please visit the donation page at www.lz-grace.com

Each cuff is hand crafted and made of quality silver and gold plate.

100% of the proceeds will help to grow LZ-Grace (Landing Zone Grace), a place of respite and renewal for our Special Operation Warriors (from all branches) returning from combat.

LZ-Grace is registered with the IRS as a 501(c)(3) charitable foundation. All donations are tax deductible.

(The original Sharing Strength was published on August 6, 2012. I share it here today for those who have not read it… with the hope that all of us can join in prayer and support for the Families and Brothers of our Fallen)

This is the miracle of human connection: we do not need to be in the same room, the same state, or the same country to reach out our hands and lay bare our hearts and say, I stand with you stunned – in silence and prayer, I will hold your hand, I will share your tears, I will take the impact of your pain as my own and bear it with you. We are all one. I feel this loss because this too is my brother, my child, my beloved. And I will stand with you – the left behind, the living – and share my strength.

Five years ago the world lost 30 brave men and Bart, a Warrior Dog – all heroes – aboard Extortion 17 in Afghanistan. The families, friends and loved ones of the fallen are scattered across the country and globe and while it is impossible to reach each of them in person or by phone, entire communities have come together to raise funds, show support and share in the grief of loss.

There is such comfort in knowing we are never really alone.

It is a poignant reminder of the first time in my adult life I learned this lesson.

On September 25, 1978 I began my drive to work from Coronado to San Diego.  Half-way across the Coronado Bay Bridge, a perfect 230 feet above water, sun glanced off my windshield and created a tunnel-like view of a small plane as it clipped the underside of a passenger jet and dropped from the sky.  I slammed my foot on the breaks and stepped out. As cars on the bridge screeched to a stop behind me, I stood and watched with horror as the jet banked away, paused, and began a nose down dive.  The sky shrieked wildly until it didn’t.  For one brief moment I imagined the plane was landing, until it hit the earth and exploded into a pluming black cloud.  Movement around me slowed to half speed, then quarter speed, as if the air in the blue sky had thickened with sorrow.

Those of us watching from the bridge began to scream; the sound inhuman, swallowed whole by the eerie howl of a sudden hot wind.  The heat roiled in my stomach and I bent over where I stood and vomited.  A man, a complete stranger, came to me and held my head, smoothed my hair back.  He made kind sounds, non-words that echoed through the blood buzzing in my ears.

I don’t remember the drive to the crash site.  I do remember following my stranger’s silver Mercedes as though it was a lifeline, a reality I needed to stay with.  We parked blocks away, but we felt the heat, even then, as he took my hand.  We ran, or he did.  I stumbled beside him, keeping pace with the sirens, praying, passing stunned people who staggered into the streets.  A wall of heat and smoke stopped us and we stood, useless.

My stranger fell to his knees then, pulling me down with him, crushing my hand to his chest while he wept; long crawling gasping sounds.  We huddled there in the street on our knees, and between sobs he told me that he’d been running late, on his way to the airport to pick up his daughter.  She was 25, working in LA and coming for a visit.  Surely, she’d forgive him for leaving her stranded.  He whispered the last words and I put my face close to his, looked into his eyes and took the full impact of his words.

I felt then like elderly people must feel when they forget who they are, where they are, what shoes are for, when each gesture calls meaning into question, unbuttoning a button, breathing.  I was 20, a mere child, but I forced myself to understand we were taking turns, as people do, in sharing strength.

I learned later that the 727 was carrying more than six tons of fuel, much of it in the wing tanks.  The news reported that from the moment of impact with the Cessna, it took just 17 seconds to transform PSA Flight 182 from a fully functional airliner into a mass of burning wreckage encompassing four city blocks.  The crash destroyed 22 houses in North Park, and killed 7 residents, as well as all 144 people on board the jet and both pilots in the Cessna.

Jeff told me later that he knew his daughter was on the plane the moment he witnessed the impact, but that tending to me and having me with him gave him the strength he needed to “keep the fist out of his gut long enough to know, without a doubt, that he couldn’t save her.”

Jeff and I remained friends from that day on. He was finally able to go home to his daughter in September, 2002.

Aboard Extortion 17 that day were 17 of my husband’s Brothers – U.S. Navy SEALs. It is this brotherhood of men and their families who sustain the families of the Fallen in any way they need. That support will last a lifetime. I know this because they sustain me today as the widow of a veteran Navy SEAL. Without a doubt, on August 6, 2011, my husband Steve and many of his Brothers welcomed all 30 – and Bart – into a brotherhood that lives on in Heaven as a Platoon of Warrior Angels. Grace meets us where we are.

“There is tenderness in the presence of true strength; it fairly grips the soul and stays long after the moments fade, years I think. Perhaps even a lifetime.”

Lynnette Bukowski is a freelance author and artist and the Founder/Director of LZ-Grace (Landing Zone Grace) Warrior Retreat. (www.lz-grace.com)

A limited number of these custom cuffs were made exclusively for LZ-Grace (Landing Zone Grace) Veterans Retreat in loving memory of our 31 heroes killed in action on August 6, 2011.

To order, visit the donation page at www.lz-grace.com or email me at lynnette@lz-grace.com

Each cuff is made of quality bronze, silver and gold plate, molded in dies, touched by craftsman and may be ordered in Brass or Silver.  The cuffs are hand crafted; Size: 7” x 11/2”

100% of the proceeds will go to grow LZ-Grace (Landing Zone Grace) Veterans Retreat, a place of respite and renewal for our newly transitioning Warriors.

A portion of donated funds may be set aside by LZ-Grace Veterans Retreat to benefit the children of our Fallen Warriors.

100% of all donations go to providing a place of respite and peace for our Warriors and First Responders. LZ-Grace has no paid executives or employees. We are an all volunteer, grass roots Foundation. Please dontae here: https://www.lz-grace.org/donate